Ebola-fighting MP3s, Steam being its usual Steam-y self, gaming as a disorder, Article 13, and Star Wars descending into mediocrity. All of this and much more, on episode 23 of CTRL+D.

Check out episode 22 of CTRL+D, in which we did our recap of E3 2018, and first tested our new intro technique.

Yes, indeed… Someone out there, thinks Ancient Greeks were Christians. 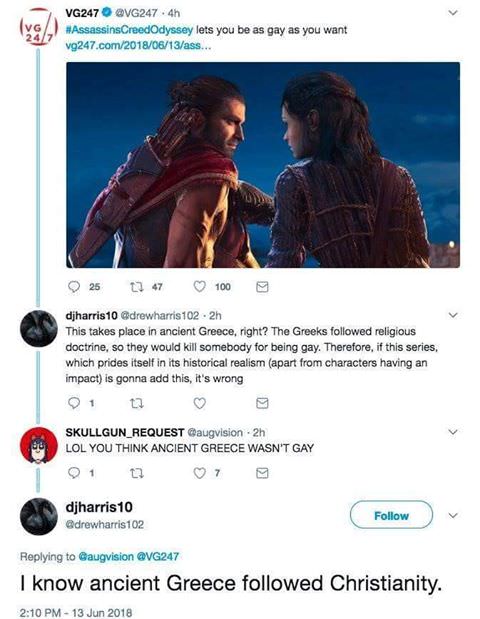 Steam being its usual Steam-y self, allowed a game called Active Shooter, to be sold on its storefront. Then promptly took it down. But it took it down for reasons entirely unrelated to how terrible this so-called “game” is. Luckily, others did not need to take any flak from the internet, before moving in to interrupt any means of selling the game online.

Ladies and gents, may I present to you Alien Food Frenzy, also known as “the game that came without an executable“. As discovered by YouTuber extraordinaire penguinz0, also known as Cr1TiKaL.

As I type this for you on a keyboard with barely legible WASD keys, I have to report on the World Health Organisation putting an official classification to a condition known as “gaming disorder”. Yikes!

Microsoft recently bought GitHub for 7.5 billion USD, and for once in all of recorded human history, Microsoft acquiring something may actually end up being a good thing.

Boba Fett is set to star in his own movie.

Something, something, Pedro asked me to put this in the show notes, Star Wars, something.

Sicario 2: Day of the Soldado shall come out in about 2 days time (06-29). In the United States of Freedom Fries and Minuteman Salsa, that is.

Revel in the glowing beauty of the amusingly terrible idea of a Summer music festival inside the Chernobyl exclusion zone.

The European Union, not to be outdone by the likes of Barbra Streisand, has decided to go on a crusade against the Internet.

World, meet “Dr.” Bill Grey. “Dr.” Grey wants you to believe he can cure ebola via .mp3 files on your phone. For that, “Dr.” Grey has rightfully deserved a spot on our list of contenders for the 2018 Bobby Awards.